As one of the most watched tv series in modern history, this property listing is sure to pique the interest of many. 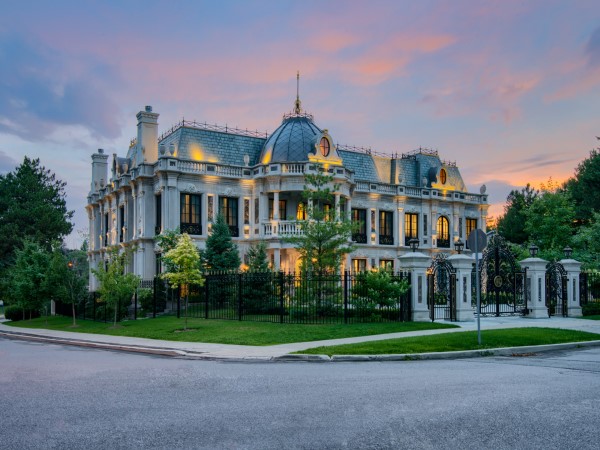 The not-so-humble home where we first met the Rose family in the pilot episode of Schitt’s Creek has hit the Canadian property market with a $21.8 million (roughly $23.5 million AUD) price tag. It’s actually the second time this year the mega-mansion has been listed, albeit a cool $2M higher than its February asking price. Moria would be proud.

Located on Fifeshire Road in the exclusive suburb of North York in Toronto, Canada, the opulent abode was built in 2012 and designed by its original and current owner, Canadian property developer Van Lapoyan.

The 12-bedroom French Chateau-inspired residence that the Roses were unceremoniously evicted from in the opening episode of the series is as ostentatious as its fictional first owners, laden with gold accents, marble columns, crystal chandeliers, and Sistine-Chapel-inspired ceiling art.

Modestly named ‘La Belle Maison’, meaning ‘The Beautiful Home’ in French, the sprawling 24,000-square-foot residence boasts 16 bathrooms on top of its 12 bedrooms (plenty of room for bébés) and includes an elevator, sauna, indoor and outdoor pool, 150-person capacity banquet hall, as well as a heated, custom stone-paved circular driveway with parking for 14 cars. As you do.

If you’re still working your way up to filling all those car spaces (can relate), perhaps consider letting Drake, your friendly neighbour, park some of his overflow in your driveway—his $100M residence is just down the road.

La Belle Maison isn’t the only Rose-rented dwelling that’s recently been put up for sale, either. The humble Rosebud Motel was listed late last year, sans its iconic sign. The 10-room property, known in real life as the Hockley Motel, sits on 6.7 acres in Mono, Ontario, and was listed for about $2.1M AUD.

Despite being portrayed as a run-down nine room motel in the show, in actuality the Hockley Motel consists of six units with kitchenettes (where you can fold in the cheese) and baths, and a two-story manager’s suite (AKA Stevie’s spot) with three bedrooms and one bath.

Also on the grounds is a “mobile home with a Florida room”, a 65 sqm detached guest cottage, and a three-stall horse barn. “This place is almost charming. Very rustic cottage, I was half expecting early Unabomber”, you can almost hear Moira say.

The last owner of the motel, Jesse Tipping, bought it in 2012 for $820,000, and said she held high hopes that whoever purchased the property would transform it into a Schitt’s Creek themed motel for fans to visit. Genius. As to whether someone took her up on the offer, it’s hard to say. The listing has been taken offline, but there’s no news about a sale, either. Word around town is that maybe Tipping realised she was sitting on a multi-million-dollar idea and reneged on the sale. But as we know, gossip is the devil’s telephone—best to just hang up.

So, what real estate’s left of the iconic fictional town of Schitt’s Creek? Well, Café Tropical is yet to enter the market. Your move, Twyla.